"This is a Historical Record of the Old Chicago Council on Global Affairs Website. Are you Looking for the Current Site?" 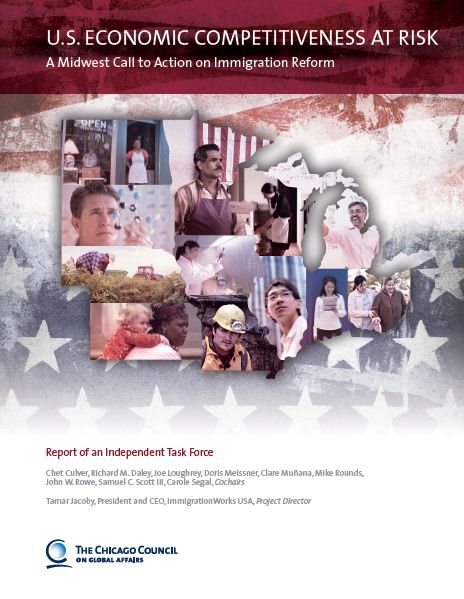 An independent task force of 53 leaders released a report, “US Economic Competitiveness at Risk: A Midwest Call to Action on Immigration Reform”, which analyzes the role of immigration in ensuring the Midwest’s future competitiveness and prosperity and identifies necessary policy directions or interventions.  It argues immigrants are essential to the region’s and the nation’s future prosperity and key to economic revitalization.

The report was released on Thursday, February 28, 2013 by cochairs and members of the The Chicago Council’s

independent task force at the National Press Club in Washington

I. Immigration Reform for America’s Future

The future of the United States depends on far more than economic recovery: the holy grail for the long term is economic competitiveness. Can U.S. firms compete with companies in other countries? Are our industries and our workers as productive as others? Is productivity growing as fast in America as it is elsewhere in the world? Many ingredients go into a nation’s competitiveness. Yet when America or any region of America starts to fall short on too many criteria, companies making decisions about where to build plants, open laboratories, and create jobs go elsewhere.

At the top of the skill ladder and at the bottom, immigrants are an essential piece of America’s global competitiveness. We as a nation must work harder to attract and retain immigrant talent and avoid wasting the potential of the immigrants already here.

Our problem: the nation’s broken immigration system is holding back the region’s economic growth and clouding its future. Worst of all, there is little we Midwesterners can do about the failings of federal immigration law. As the stories throughout this report illustrate, states, municipalities, educators, employers, faith leaders, and others across the Midwest are stepping up with local solutions to help newcomers thrive in our communities. But only Congress can do what needs to be done, creating an immigration system that works for the Midwest—for our businesses and our communities.

II. Key to Competitiveness: A Workforce That Meets Our Needs

Despite increasing educational attainment across all levels of society, the U.S. workforce alone is not educated enough to sustain a globally competitive knowledge economy. Sixty to 70 percent of the students in American computer science and electrical engineering graduate programs are foreigners on temporary visas. Twenty-five percent of U.S. patents are held by innovators born abroad. One-quarter of the high-tech firms launched in the United States between 1995 and 2005 were founded by immigrants. These newcomers don’t supplant U.S. workers. They enhance American productivity and create jobs. We need their talent to sustain our economic edge—and will need it increasingly in years ahead.

America also needs less-skilled immigrants. Long-term demographic and educational trends are changing the size and makeup of the native-born workforce. U.S. families are having fewer children. Baby boomers are retiring. Perhaps most significant, Americans are increasingly educated. In 1960 half of the native-born men in the U.S. workforce had dropped out of high school and were doing unskilled work. Today, the figure is less than 10 percent. Much of the economy, particularly in the Midwest, is undergoing an industrial restructuring that makes less-skilled workers even more essential than they were in the past.

The economic downturn has done nothing to change the fundamental educational and demographic trends that make foreign workers essential for American prosperity. Even with today’s high unemployment, employers in many sectors—high-tech, agriculture, the seasonal economy—need immigrants to keep their businesses open and contributing to the economy. As the economy improves, this need will only grow—global talent and the less-skilled workforce alike will play an essential role in the nation’s economic recovery.

We must make the right choices about immigrants at both ends of the job ladder. We need innovators and investors, and we need a legal way for low-skilled immigrants to come to the United States to work.

III. The Midwest—Successful Past, Microcosm of the Future

When Americans boast that they are a nation of immigrants, the claim rests in large part on the experience of the Midwest. But the Midwest is also a microcosm of the three principal challenges facing the United States today as the nation grapples with a new wave of immigration: the need for labor at both the top and bottom of the economy, the need for better enforcement of immigration law, and the dilemmas posed by millions of unauthorized immigrants already living and working in the United States.

In the twenty-first century, as in the past, parts of the Midwest—major cities, meatpacking towns, some rural areas—are among the most diverse parts of America. Lao and Vietnamese refugees are spread across the region. Dearborn is the established capital of Arab America. Minneapolis-St. Paul is emerging as the capital of U.S. Hmong and U.S. Somalis. The wave of Bosnian refugees that arrived in the 1990s joined older Bosnian communities in St. Louis, Chicago, and Grand Rapids. And many traditional Midwest sectors would be at a loss without foreign workers. Some 40 percent of the dairy workers in Wisconsin are Mexican, as is much of the labor force in meat and other food processing plants across the region.

As recently as 1990, most of the towns now transformed by foreign workers were settled, homogeneous communities, 80 to 100 percent white. In some places, tensions flared when the newcomers arrived. But there has also been other types of responses, strongest in the communities where the influx has been most dramatic—a quintessentially Midwestern reaction that could hold the seeds of a new American response to immigration. It has come from many quarters, some of them surprising: local ministers, concerned neighbors, the town librarian, the mayor, a local bank, sometimes the company that owns the processing plant.

Whatever the source, the impulse is the same—to find a way to deal pragmatically with the newcomers transforming the region. Across the Midwest, settled residents have recognized the way newcomers are revitalizing their communities, demographically but also in other ways. And for all their initial suspicion, after a while many seem to recognize a spirit not unlike their own—hard-working, church-going, family-oriented people who make the region a better place.

Like the rest of America, the Midwest is hostage to federal immigration policy, and states are left to cope—or not cope—the best they can. But that doesn’t mean the Midwest must remain silent. On the contrary, the region’s growing need for immigrant workers and its deepening appreciation of the talent and vitality they bring give Midwesterners a unique role—and unique responsibility—in spearheading the call for better answers from Washington.

IV. What the Midwest Needs from Immigration Reform

V. The Midwest Needs a Solution

The time is now—it’s time to get this done.

Midwesterners understand political reality, and we see how hard it has become for Republicans and Democrats in Congress to come together to produce solutions on any issue, let alone an issue as complex and polarizing as immigration. But that can’t be an excuse. We can’t afford an excuse. We need answers—now—for our economy and our communities.

We in the Midwest need better solutions on our borders. We need solutions in the workplace. We need visas for high- and low-skilled workers. We need a legal immigration system that works for entrepreneurs, inventors, investors, STEM students, nurses, home health care aides, busboys, farmhands and seasonal hotel help. We need employment-based immigration that meets the needs of employers and employees. We need a family-based system that reunites relatives in a timely way. We need solutions that serve immigrants without shortchanging U.S. workers. And we need a path to citizenship for Dreamers and their parents.

The region’s competitiveness—our livelihoods, our future, our children’s future—hangs in the balance. We need Congress to act. It’s time to step up and get the job done. We in the Midwest need answers on immigration, and we need them now.